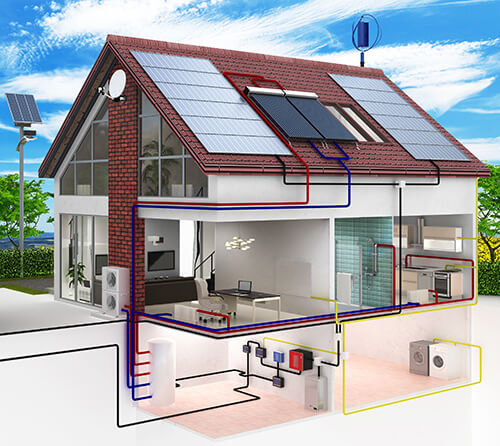 It is now fairly common to be able to access a home’s entire network of electronic equipment using a home automation portal installed on a smartphone or tablet. HVAC, lighting, security and appliance systems are now all considered ‘M2M’ (machine-to-machine) peer nodes that can actually interact with each other. Want your attic fan to communicate with your A/C unit so the two can operate as efficiently as possible together? Yes, that’s actually happening now.

In fact, a recent report from Berg Insight shows that new home automation systems will be installed on over 25 million homes before the end of 2016. The entire idea behind home automation is to give the homeowner complete, immediate control over any changeable state in their home. This extends to the garage door motors, automatic deadbolts and motion-sensing alarm systems. But what about solar power systems and their ongoing management? Is there a play for home automation to integrate with solar power systems?

It’s an interesting question and in this week’s blog post, we’re going to speculate on it just a bit. One of the more obvious questions that arises when talking about home automation and solar power is, “What needs to be measured or monitored?”. Also, “Will the homeowner ever want to suddenly power down his solar power system for any reason?”. The answer to the first question could include any of the following metrics that a homeowner might want to know about how their solar power system is operating:

In theory, a home automation system that integrated a solar power system would allow the homeowner a deeper, more real-time understanding of how their investment is performing for them. One important variable here is of course cost, and many home automation systems might simply be overkill for the average consumer.

Urban Solar stays on top of all of the newest industry trends related to solar power. If you have a unique idea about how integrate solar into your home or business, we want to talk to you! Contact us for a complimentary energy assessment.